Music is the hidden arithmetical exercise of a mind unconscious that it is calculating.

At the weekend I played in a couple of concerts at Thomas Larcher’s festival, Musik am Riesen (Music in the Giant) in a town called Wattens in Austria where I was seriously re-educated about Swarovski. It’s genius! There is the fairytale story of a young Daniel Swarovski who travels from his native Bohemia in 1895 to start a small business cutting crystals, not out of glass, but with a unique and secret compound that reflects and refracts light and colour like no other substance, and over the course of a century and five generations, it turns into a huge global brand, employing 30,000 people. But there is also, more interesting for me, the fact that this company is still really crazy about beauty and creativity. They have built a ‘Giant’, whose head lies above ground, and through whose body you walk to see a mind-blowing exhibition underground including installations by Brian Eno and Alexander McQueen and many other talented individuals. 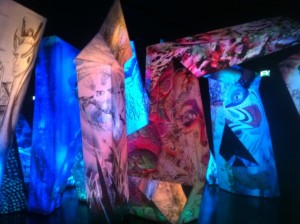 They invest millions (literally), and countless hours/weeks/months building new technology to make breathtaking things with crystals. It was such a joy. I can’t recall having come across that marriage of successful business and commitment to art and imagination before, and I left feeling so inspired.

The concerts were great, and hospitality second to none, but how wonderful for an artist to leave a place feeling that he’s been given a gift of art.

This site uses Akismet to reduce spam. Learn how your comment data is processed.